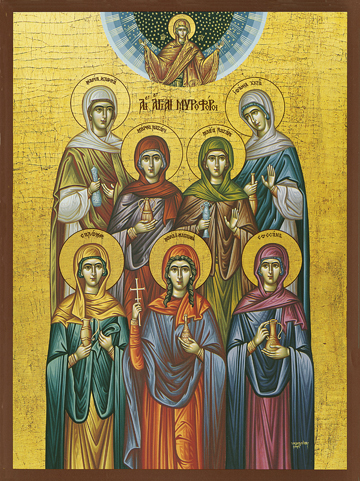 The myrrh-bearers had brought funeral spices and ointments to finish committing Christ’s body to the grave. They were the first to see the empty tomb and were instructed by the risen Lord to bring the joyful news to the apostles. Sts. Joseph of Arimathea and Nicodemus are also commemorated on this day.

There are eight women who are generally identified as the myrrh-bearers. Each of the four Gospels gives a different aspect of the roles of these eight women at the cross and at the tomb on Easter morning, perhaps since the eight women arrived in different groups and at different times. The eight were:

These eight women had been together throughout Jesus’ public ministry. Mary Magdalene, Joanna, Susanna, and others (Luke 8:3) are described as providing for Jesus out of their possessions. These same women also faithfully followed him from Galilee and came up with him to Jerusalem.

Troparion (Tone 2) –
The Noble Joseph,
When he had taken down Your most pure Body from the tree,
Wrapped it in fine linen and anointed it with spices,
And placed it in a new tomb.
But You did rise on the third day, O Lord,
Granting the world great mercy.

Troparion (Tone 2) –
The angel came to the myrrhbearing women at the tomb and said:
Myrrh is meet for the dead;
But Christ has shown Himself a stranger to corruption!
So proclaim: the Lord is risen,
Granting the world great mercy!

Kontakion (Tone 2) –
You did command the myrrh-bearers to rejoice, O Christ!
By Your Resurrection, You did stop the lamentation of Eve, O God!
You did command Your apostles to preach: The Savior is Risen!