The Orthodox Bible contains certain other Scriptures besides that normally found in the Hebrew bible and most English language Bibles. The word Apocrypha means things that are hidden, although why so is not positively known. Sometimes these books are given the title Deutero-canonicalas contrasted to Proto-canonical to distinguish the first (or proto) canonical books from those that came later (deutero second). This term is to be preferred over Apocrypha since that word may have negative meanings.

The Deutero-canonical books appeared as part of Holy Scripture with the translation of the Hebrew Scripture into Greek by Alexandrian Jews who had been gathered together for that purpose in Egypt just prior to the New Testament times. Over the centuries, however, these books have been disputed by many; many hold them to have little or no value as Scripture. However, both the Orthodox and Roman Catholics accept them as part of the Biblical Canon, whereas, since the Reformation, most Protestants have rejected them as being spurious. Although the Orthodox Church accepts these books as being canonical, and treasures them and uses them liturgically, she does not use them as primary sources in the definition of her dogmas.

The Greek Additions to the Old Testament that are accepted by the Orthodox Churches are the following:

The Wisdom of Solomon

Ecclesiasticus, or the Wisdom of Jesus the Son of Sirach

The Letter of Jeremiah

Song of the Three Youths

Daniel, Bel and the Dragon

The Prayer of Manasseh

[Fourth Maccabees is not accepted by the Russian Church and is placed in an Appendix by the Greek Church.]

This book (2nd Esdras in Russian Bibles) was written probably in the 2nd Century B.C. by an unknown Greek-speaking Jew, whose purpose was to emphasize the contributions of Josiah, Zerubbabel and Ezra to the reforms of Israelite worship. It basically reproduces 2 Chronicles 35-36, all of Ezra and Nehemiah 7:38-8:12.

This book (3rd Esdras in Russian Bibles not used by the Greek Church) was probably written by an unknown Palestinian Jew near the close of the 1st Century A.D. The main part of this book consists of seven revelations, in which the seer is instructed by the angel, Uriel concerning some of the great mysteries of the moral world.

This pious story was written probably in the 2nd Century B.C. by an unknown author. The setting of the story is Nineveh, the Assyrian capital, where the people of the Northern Kingdom of Israel had been taken captive in 721 B.C. with the Fall of Samaria. A pious Jew, named Tobit, lived in the city and was known for his many charitable deeds. Yet, despite these deeds, he became blind and poverty-stricken (Ch. 1-2). At the same time, in faraway Media, there lived Sarah who was haunted by a demon. God heard the prayers of both and sent the angel, Raphael to save them (Ch. 3). Tobit commissioned his son, Tobias, to go to Media to collect a sum of money he had deposited there many years before. The Angel Raphael, his identity hidden from Tobias, accompanied him to Media, revealing to him magic formulas which would heal his father’s blindness and also exorcise Sarah’s demon-lover, Asmodeus (Ch. 4-6). The mission was successfully completed by Tobias and he married Sarah (Ch. 7-14).

This pious, yet nationalistic tale was probably written in the 2nd Century B.C. and is concerned with a Jewish heroine, Judith, who saves her people from the depredations of Holofernes, a general of the Babylonian King Nebuchadnezzar. The purpose of the book seems to be to encourage the Jews in a time of persecution. It is divided into two parts: 1) (Ch. 1-7) This sets up the battle between the overpowering forces of paganism and helpless, little Israel. 2) (Ch. 8-16) Here we have a description of the defeat of these forces by the hand of a woman, Judith.

The Wisdom of Solomon.

This book is probably the last book of the Old Testament and was written around 100 B.C. by an Alexandrian Jew, although he probably used earlier materials even those possibly written by King Solomon. Here the concept of wisdom is personified (and this will ultimately lead to the New Testament idea of the Word of God, that is, Christ). The book can be conveniently divided into three parts: 1) Chapters 1-5 deal with the vital importance of Wisdom in determining the eternal destiny of men; Chapters 6-9 speak of the origin, nature and activities of Wisdom, as well as the means to acquire it; and Chapters 10-19 are a description of Divine Wisdom directing the destiny of Israel from Adam to the Exodus from Egypt. This book is used by the Orthodox for Old Testament Readings on the occasion of many Feasts of Saints.

Ecclesiasticus, or the Wisdom of Jesus the Son of Sirach.

This book is the work of Jesus, the son of Sirach, probably a Jewish Scribe who committed his teachings to writing about 180 B.C. Soon after 132 B.C., his grandson (see the Prologue) translated the book into Greek. The book is an important link between the Wisdom Literature of ancient Israel and the rabbinical schools of the Pharisees and Sadducees. It basically consists of one man’s lifetime of meditation on the Scriptures, on life in general and on his own broad experience. The book can be divided into two basic parts: 1) (Ch. 1-43) practical moral instructions for all and 2) (Ch. 44-50:24) a eulogy of the great men of Israel’s past. This is followed by an Epilogue containing biographical details and several songs (Ch. 50:25-51).

This book, purported to be written by Baruch, the Prophet Jeremiah’s secretary, to the Exiles in Babylon, was intended to instruct the Israelites as to how to make the annual pilgrimage to Jerusalem. It can be divided into three parts: 1) (Ch. 1-3:8) Introduction and confession of Israel’s guilt in a long penitential prayer; 2) (Ch. 3:9-4:4) The nature of true wisdom which comes from God alone and is found in His holy law; and 3) (Ch. 4:5-5:9) A penitential psalm leading to the preparation for the happy return of the Exiles to Jerusalem and her own future Messianic glory.

The Letter of Jeremiah.

This is usually found as Chapter Six of Baruch (although obviously written by someone else) and purports to be a letter from Jeremiah to the Jews who were about to be taken, as captives, to Babylon. This is an impassioned sermon against participation in the worship of idols, showing that they are simply impotent things.

The Prayer of Manasseh.

This beautiful penitential prayer (read at the Great Compline Service) is purported to be a prayer of wicked King Manasseh of Judah, while in exile, entreating divine forgiveness for his many sins.

The author of this book was probably a Palestinian Jew living in Jerusalem, who wrote not long after the death of the High Priest John Hyrcanus I (134-104 B.C.). After an introduction briefly sketching the conquests of Alexander the Great, the division of the Empire and the origin of the Seleucid Empire (Ch. 1:1-10), he recounts the main events of Judea’s history from the accession of Antiochus IV (175 B.C.) to the reign of John Hyrcanus I, which marked the period of the successful struggle for Jewish independence. Thus the book can be divided into four parts: 1) (Ch. 1-2) Prelude to the Maccabean wars; 2) (Ch. 3-9:22) Military exploits of Judas Maccabeus; 3) (Ch. 9:23-12:54) Exploits of Jonathan Maccabeus; and 4) (Ch. 13-16) Exploits of Simon Maccabeus.

This book is an abridgment of a five-volume history, now lost, by one Jason of Cyrene, and is a theological interpretation of Jewish history from the time of the High Priest Onias III and the Syrian King Seleucus IV to the defeat of Nicanor’s army (180-161 B.C.), paralleling 1 Mac. 1:10-7:50. The author is the first known to us to celebrate the deeds of the martyrs and clearly teaches that the world was created out of nothing. He believes that the saints in Heaven intercede for men on earth (15:11-16), and that the living might pray and offer sacrifices for the dead (12:43-45). The book can be divided into three parts: 1) (Ch. 1-2) Two letters from the Jews of Jerusalem to the Jews of Egypt; 2) (Ch. 3-10:9) Events relating to the Temple, priesthood and the Syrian persecution of the Jews from 176-164 B.C.; and 3) (Ch. 10:10-15:39) The successful military campaign of Judas Maccabeus and the defeat of Nicanor.

This book, written during the 1st Century B.C., deals with the struggles of Egyptian Jews who suffered under the reign of Ptolemy IV Philopater (221-203 B.C.) and the persecution of Palestinian Jews under Antiochus IV Epiphanes (175-164 B.C.). It was written obviously to console, exhort and teach Egyptian Jews who, during the 1st Century B.C., were several times threatened with alteration of their civic status by the Roman Administration of Egypt.

This book is included in the Greek Orthodox Bible (in an Appendix), but is not found in Russian Bibles, and is a classic example of the interpretation of Judaism in terms of Greek philosophy. It is a lecture on religious reason, as exemplified by the story of the martyrdom of Eleazar, the Seven Maccabean Brothers, and their mother, Solomonia, and was probably written about 20-54 A.D.

Excerpt taken from “These Truths We Hold – The Holy Orthodox Church: Her Life and Teachings”. Compiled and Edited by A Monk of St. Tikhon’s Monastery. Copyright 1986 by the St. Tikhon’s Seminary Press, South Canaan, Pennsylvania 18459. 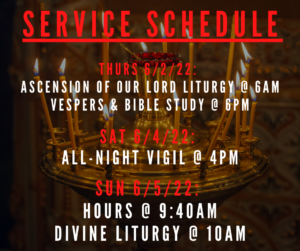