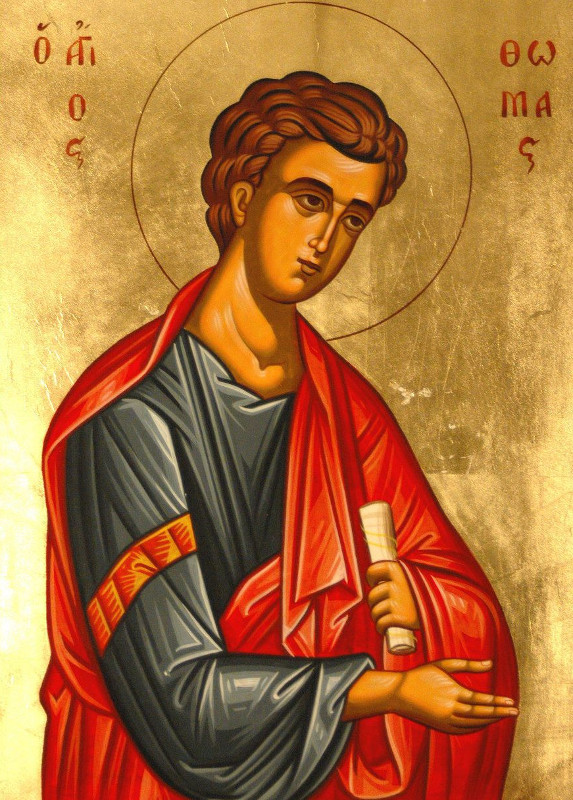 Thomas was one of “The Twelve” apostles chosen by Jesus (set apart from all the other disciples) – not merely to serve Him in His earthly ministry, but for all time. Upon Jesus’ ascension to heaven, Thomas (as one of the remaining eleven) was specifically commissioned to go and make disciples of all nations, baptizing them and teaching them to observe all he had commanded them. As one of those eleven, Thomas was “one sent.”

Though he doubted, Thomas also believed. Best remembered for doubting the Resurrection until allowed to touch Christ’s wounds, he made what is certainly the most explicit statement of faith in the New Testament: “My Lord and My God!” (John 20:24-28) In so expressing his faith, Thomas gave Christians a prayer that will be said till the end of time.

Thomas also occasioned a compliment from Jesus to all later Christians: “Have you come to believe because you have seen me? Blessed are those who have not seen and have believed” (John 20:29).

Thomas should be equally well known for his courage. Perhaps what he said was impetuous—since he ran, like the rest, at the showdown—but he can scarcely have been insincere when he expressed his willingness to die with Jesus. The occasion was when Jesus proposed to go to Bethany after Lazarus had died. Since Bethany was near Jerusalem, this meant walking into the very midst of his enemies and to almost certain death. Realizing this, Thomas said to the other apostles, “Let us also go to die with him” (John 11:16b).

During the Last Supper, after Jesus had just told The Twelve he was going to prepare a place for them in his Father’s house he added – “Where I am going, you know the way.”  Thomas was honest enough to reply “Master, we do not know where you are going; how can we know the way?” Jesus’ memorable response – at the core of our Faith – was “I am the way and the truth and the life. No one comes to the Father except through me.” (John 14:2-6)

Though not scripturally based, it is thought that Thomas preached in Parthia, Persia and India. The story goes he was so reluctant to start the mission that he had to be taken into slavery by a merchant headed that way.* He eventually gave in to God‘s will, was freed, and planted the new Church over a wide area, forming many parishes and building many churches along the way.

Symbols associated with Thomas are the builder’s square and the spear.

*In the early centuries, Gnostics sought to appropriate the figures of Jesus and St. Thomas for their fanciful, non-Christian religion. Their spurious writings, which the Church rejected at the time, include the so-called “Gospel of Thomas, and the “Acts of Thomas.” The latter Gnostic work consists of 14 fairy tales about Thomas’ miracles in India, as a carpenter, master builder and healer. This work of fiction found new life in the Middle Ages when two of the tales were repeated in a widely read work of pious, Christian fiction, “The Golden Legend: Readings on the Saints.”

Prayer to St. Thomas the Apostle, for Faith

Almighty and ever living God, who didst strengthen thine apostle Thomas with sure and certain faith in thy Son’s resurrection: Grant us so perfectly and without doubt to believe in Jesus Christ, our Lord and our God, that our faith may never be found wanting in thy sight; through him who liveth and reigneth with thee and the Holy Spirit, one God, now and for ever.


Prayer to St. Thomas the Apostle, for Spending Ourselves in His Service

O Glorious St. Thomas, your grief for Jesus was such that it would not let you believe he had risen unless you actually saw him and touched his wounds. But your love for Jesus was equally great and it led you to give up your life for him. Pray for us that we may grieve for our sins which were the cause of Christ’s sufferings. Help us to spend ourselves in his service and so earn the title of “blessed” which Jesus applied to those who would believe in him without seeing him. Amen.


Prayer to St. Thomas the Apostle, Pray for Me

Lord Jesus, St. Thomas doubted Your resurrection until he touched Your wounds. After Pentecost, You called him to become a missionary in India, but he doubted again and said no. He changed his mind only after being taken into slavery by a merchant who happened to be going to India. Once he was cured of his doubt, You freed him and he began the work You had called him to do. As the patron saint against doubt, I ask him to pray for me when I question the direction in which You are leading me. Forgive me for mistrusting You, Lord, and help me to grow from the experience. Saint Thomas, pray for me. Amen.


Prayer to St. Thomas the Apostle, for Architects, Builders and Carpenters

Dear St. Thomas, you were once slow in believing that Christ had gloriously risen; but later, because you had seen him, you exclaimed: “My Lord and my God!” According to an ancient story, you rendered most powerful assistance for constructing a church in a place where pagan priests opposed it. Please bless architects, builds and carpenters that through them the Lord may be honored. Amen.