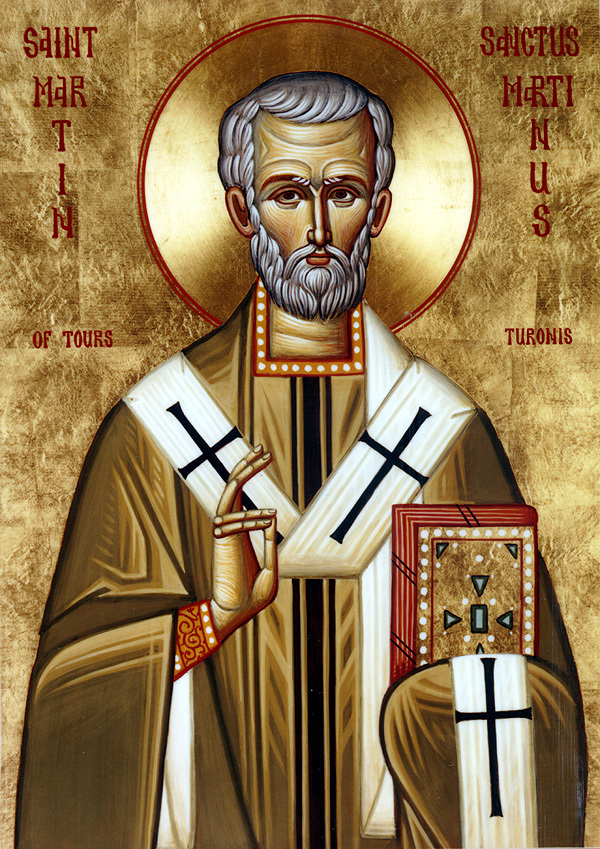 Our father among the saints Martin the Merciful, Bishop of Tours (Latin: Martinus), was a bishop of Tours in the fourth century; he is called the Merciful because of his generosity and care for the poor. The saint showed interest in Christianity at an early age. After service in the Roman army, he was baptized and became a disciple of St. Hilary of Poitiers who was prominent in the trinitarian disputes with the Arians. He was acclaimed bishop of Tours in 371. He founded the monastery Marmoutier where he led a austere life with cave-dwelling cenobites. Veneration of Martin was very popular in western Europe during the middle ages. After his death he was buried in Tours where, in time, a large basilica was built as the shrine of St. Martin of Tours. His hagiographer Sulpitius Severus, a contemporary, recorded the events in his life.

Martin was born in 316 or 317 in Sabaria, Pannonia, in present day Hungary, into a military family. His father was a tribune in the Imperial Horse Guard and was stationed in Ticinum, Cisapline Gaul, which is modern day Pavia, Italy. He was named after the Roman god Mars. Against his parents’ wishes, young Martin began attending church at the age of ten, becoming a catechumen. At the age of fifteen, and being the son of a Roman officer, he was required to join the cavalry. In the course of his duties in 334 he was stationed at Samarobriva, Gaul, modern day Amiens, France.St. Martin and the cloak

It was while in Amiens that he experienced a vision that became a memorialized event in his life. He had met at the gates of the city of Amiens a scantily dressed beggar for whom Martin cut in half his military cloak to share it with the beggar. That night he dreamed of Jesus wearing the half cloak that Martin had given away and heard Jesus telling the angels: “Here is Martin, the Roman soldier who was not baptized. He has clad me.” Confirmed in his intent by this vision, Martin was baptized and after serving two more years left the army. He then traveled to Tours, to become a disciple of St. Hilary of Poitiers.

St. Hilary was a chief proponent of Trinitarian Christianity and opposed the Arianism of the Visigothic nobility. Martin returned to Italy after Hilary was exiled. In Italy, he confronted the Arian Auxentius, Archbishop of Milan, who expelled Martin from the city. Martin then found refuge and lived the life of a hermit on an island in the Tyrrhenian Sea. Martin rejoined Hilary when Hilary returned to Poitiers in 361. Here, Martin established a monastery that in time became the Bendictine Abbey of Liguge. From his monastery, Martin traveled and preached throughout western Gaul, the memory of which is remembered in many local legends.

In 371, Martin was acclaimed bishop of Tours. As bishop of Tours he greatly impressed the city’s inhabitants with his demeanor and zeal in destroying the pagan temples. Sulpicius Severus recorded in the Vita of St. Martin many of the events of this period. Sulpicius further recorded Martin’s withdrawal from the tensions of the city to the monastery, Marmoutier, that he founded across the Loire river from Tours. Here Martin led a austere life among the cave-dwelling cenobites who had gathered around him.

The basilica built over his grave as a shrine to St. Martin of Tours was a major stopping point on pilgrimages during the middle ages. During the Wars of Religion in 1562, the Huguenots sacked the shrine and, it was completely destroyed during the French Revolution. Two streets were built over the site to ensure it could not be re-built.

St. Martin of Tours continues to be remembered in many parts of western Europe through annual processions and the giving of presents to children on his day, November 11, instead of December 6 (St. Nicholas) or December 25 (Christmas). His feast day is sometimes celebrated on November 12.

Troparion (Tone 4) In signs and in miracles you were renowned throughout Gaul.By grace and adoption you are a light for the world, O Martin, blessed of God. Alms deeds and compassion filled your life with their splendors,Teaching and wise counsel were your riches and treasures,Which you dispense freely to those who honor you.

Kontakion (Tone 8) As a devoted man of God, you proclaimed His mysteries,And as a seer of the Trinity, you shed your blessings on the Occident.By your prayers and entreaties, O adornment of Tours and glory of all the Church,Preserve us, O Saint Martin, and save all who praise your memory.